The maps and the Historical Description of fray Pedro González de Agüeros: Last shreds of the Chiloe´s missionary cartography in the XVIII Century. (Part 2)

6. The Maps of the Chiloe Archipelago by Fray González de Agüeros

A recent publication by Professor David Rex Galindo, refers to the writings of González de Agüeros, showing him as an advocate of the Bourbon reform program on the borders, where the missions of the Ocopa college were located, and how these missions and their missionaries were "institutions of the imperial expansion, colonization and evangelization" strengthening Hispanic rules in the Bourbon period. The author says that González de Agüeros echoed this in his studies, as evidenced by the letters and reports reserved for the Council of the Indies and the monarch; where the religious pragmatist tunes the reformism of the Bourbons. Rex points out that the work of González de Agüeros offers "a perspective of the dynamics that, both locally and globally, affected the southernmost peripheral regions of Spanish America at the end of the 18th century" (Rex, 2020:156).
b. Also dated in 1785, the map entitled "Description of the Province and Archipelago of Chiloé, in the kingdom of Chile and Bishopric of La Concepción": It is a  29 x 42 centimeters sheet with slight differences in the outline of the coasts of the previous map , it does not indicate reliefs, the color of the lines in almagre with a blue gouache. The scale is 10 leagues, it has a yellow box with a lower tricolor line that divides each parallel into sixths. The toponymy is similar to the previous one. The original that González de Agüeros calls Map No. 5, is in the Royal Academy of History in Madrid and has been published in volume 5 of the History of the Franciscan Missions in Eastern Peru, from which we extracted the fragment of the figure 2 below. 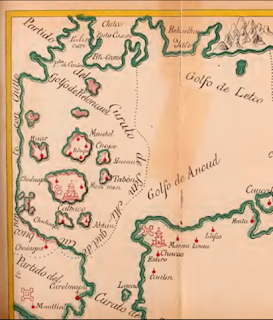 c. A third map, the most widespread of all, is the printed Geographical Map, contained in the Historical Description Book. Its size is 51 x 71 cm, and it was engraved by Francisco Ugena. On page 248 of the Description, the author says that it was made according to a map that was sent to King Carlos III by the Viceroy of Peru in 1752. It is likely that such map was made by Mateo Abraham Evrard, an Englishman residing in Chiloé (Vázquez de Acuña, 1988). From a brief reading of the graph of this map we point out: It has an outer box where the parallels and meridians are indicated; It ranges from 41°25" - 43°22" south latitude and 72°20”- 74°” west longitude. The scale is 20 leagues per degree. On its upper right corner, a poster leafily framed by laurels, in the upper part, the coat of arms of Bourbon Spain with palms and laurel branches and a lower oval with the Coat of Arms of the Order of San Francisco.The north is indicated with the lis needle, located to the East of the Big Island. The town of Castro in the center, appears hierarchical with a tower and a farmhouse; the ports are marked by an anchor: the toponyms of the chapels are shown in a small circle, the fortresses are small circle with four stems and a banderole; the shoals are dotted and the reefs marked with crosses. Small shaded lines indicate the topography of the land, the forests are represented by trees and the elevations of the terrestrial relief by hills shaded to the south; such as the Guanaca Volcano (today Calbuco,) and the hills of the Cordillera de la Costa called the Cucao Tits. 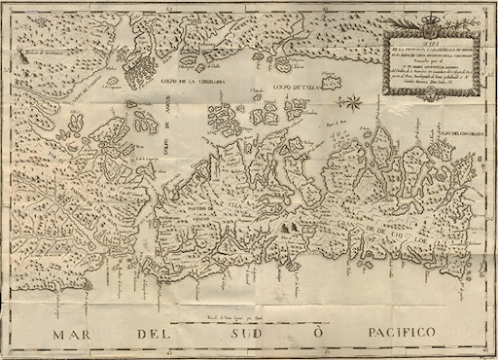 Once the authorization was obtained, Pedro González de Agüeros again requested authorization to add an extract from a Franciscan expedition to Tahiti. Once the permission was obtained, it also included the Diary of the pilot Francisco Machado's expedition to the Guaitecas and Guayaneco Archipelagos; which caused a serious incident for the circulation of the book. This, due to the fact that Machado's story had not circumvented the censorship of the Royal Academy of History, nor of other competent authorities. What had happened? As soon as the books were published by the famous Benito Cano´s  publishing house , Agüeros sent some copies to members of the royal family and ministers of State. In the Court an intemperate alarm was unleashed by the fear that the English would find out about the few and simple news that the Spanish sailor declared. The Supreme Board of State, as in a reverse of irony for the Inquisitor of Books, ordered to suspend the publication and sale of the Historical Description; apart from asking the author for the number of copies published and to whom they had been distributed. Gozález de Agüeros presented a protection appeal, in which he demonstrates the little importance of Machado's document, realizing that the cited data were widely known by the enemies of Spain; and that they had even better and more exact directions on the coasts of southern Chiloé. Therefore, in a new analysis, the ban was lifted.
As Agüeros had witnessed some negative practices of the Chiloé´s administration, he sent the King several files with reserved documentation, in which he expressed the monarch information that had not been published in the Description, because he did not want it to be of public knowledge. "A real patriot", as Vázquez de Acuña says.
Publicado por CAICAEN en 12:29 p. m. 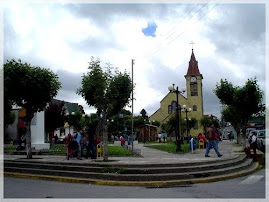